Designing motion is a really interesting thing humans are both capable and incapable of doing it. Moving away from the idea that motion is the sign of life; from the unmoved mover (Aristotle’s god) to our daily experience of consuming oxygen and producing carbon dioxide we are capable of manipulating our directions and the forms which inform our motion. This is the purpose of this post to provide a brief insight into artists that are providing an opportunity to study and look at the space occupied by interactivity and animation. So, we may appreciate their presence and prescience. Studying and learning from their great examples together. […]

I went to art school with this mad South African animator. When we were studying at Sheffield Hallam University Mathew was interested in sound and experimented extensively with this medium; his degree show exhibition was a soundscape of considerable depth. I am not sure about other influences, but I am sure he may agree with me when I say that it was not only the awesome presence of Chris Cunningham, Warp records, and Aphex Twin that influenced Williamson’s progression. His extensive use of computers to create striking imagery surely must reference the machines which invite talented individuals like Mathew to express themselves to the best of their creative abilities. There was a particular moment that I realised Mathew’s work had taken a leap up to the next level when he made an animation installation for Sheffield’s festival of mind. This Installation was projection mapped onto a curved surface and although I was not there to see this in person the image of it struck me as a moment where Matt realised the full extent of his digital potentials. Since then he has been busy living up to that potentiality recently completing work for the newest series of Doctor Who. Below, are screen shots of said Dr.Who work and other visuals stolen from his instagram you should follow him @mattwilliamsonav. You should also tune into his streaming channel and get zapped by the current. https://m.twitch.tv/mattwilliamson 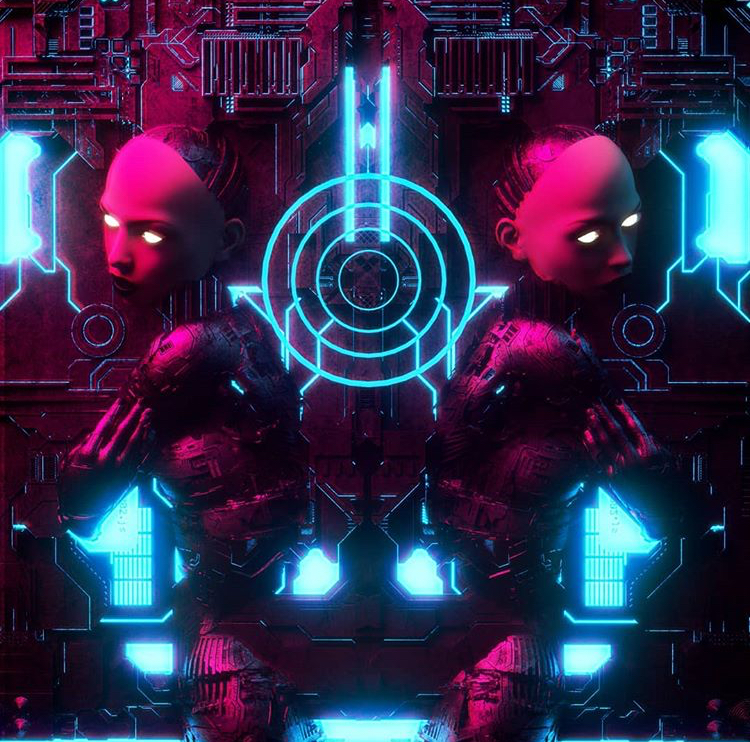 Another resident from that urban urspring of English creativity called Sheffield. Universal Everything is the baby of a certain Matt Pyke. Completing his education in Portsmouth and London he is arguably director of the most prominent and innovative team of motion designers currently swimming around the multi-verse. For a good idea of this creative characters background and person read an interview with him here >>>. Of course you should have already visited their awesome website and gawped at the magic they have drawn into existence. Below, are a few of my favorite examples of this everything which would be universal. The name is evocative and shoves the problematic presence of animation right to the edge of your eye. I will ignore the interpretation or perspective of this studio’s name that is suggestive of an easy relation to capital, ‘if everything is universal, including ourselves, then we can do everything’ – nothing is out of bounds and of course in this case although they cultivate commercial relationships with the worlds biggest companies and therefore supportive of monetary ideology; as long as we are gifted such visual wonders then perhaps we may ignore the hidden flux of finance that powers such innovations. No, not ignore, just be grateful that this group of creators are creating with such ferocity. Also, it is very much a group and this collaborative part is important: Universal Everything could be a precedent for what creatives or human creativity should achieve in the expected third industrial revolution where social networks merge with new technological spaces to produce an entirely new economy.

I really love all their images but the moving images that feature and ask the question about the relation between the organic and machine are mesmerizing. Tribes makes me think of the Anthropocene and the vast size and difficulty of providing an image that is truly applicable to all humans and their behaviour. For the next few years I hope to study language and animation so the work OFFF, a series of hybrid typographic-architecture prototypes is well lodged in my memory and has an immediate association and affinity with the architectural practice of Eniatype.

A Japanese sound artist who is completely subdued and is continuously seducing with his mathematically inspired work. Ikeda’s work is very Japanese and he has earned his reputation through a unique blending of number and minimal components of sound. Sine waves, bass, sub bass, pitch, blips, high hats, samples, white noise, sets, sub-sets, dots, dashes, equivalences, riddims, horns, digits, bits, and much more could be wielded by this great Asian alchemist. Sound is interesting because of its ontological diversity it exists but so ephemerally and this trace like structure makes us think of the quantum physics that suggests waves comprise the inner workings of physical matter. But, this idea from physics does not portray the whole story with the exact standards of science and therefore Ikeda’s work achieves something remarkable and transforms or should I say animates the physical innards of sound into images. Doing so in such a natural way that his installations often seem to be revealing the workings of the contemporary technology driving the processes that have exploded and will explode even more in the coming decades. I am suggesting that Ikeda-san has really dug deep into sounds unique matter and discovered its affinity with math. I like his work because it has that Japanese aesthetic that we all love and it makes me think of the dynamism and dualism of theories that originate in the original attempts to ground/ discover the source of mathematics. I understand that in the history of this kind of thinking there are two Set theory, and Mereology. The first discusses and determines collections of objects and the extent to which number supports said collections, the second is the study of parts and wholes, and I think that Ikeda’s art invites much more inquiry into these matters. Please enjoy these samples of his work below. 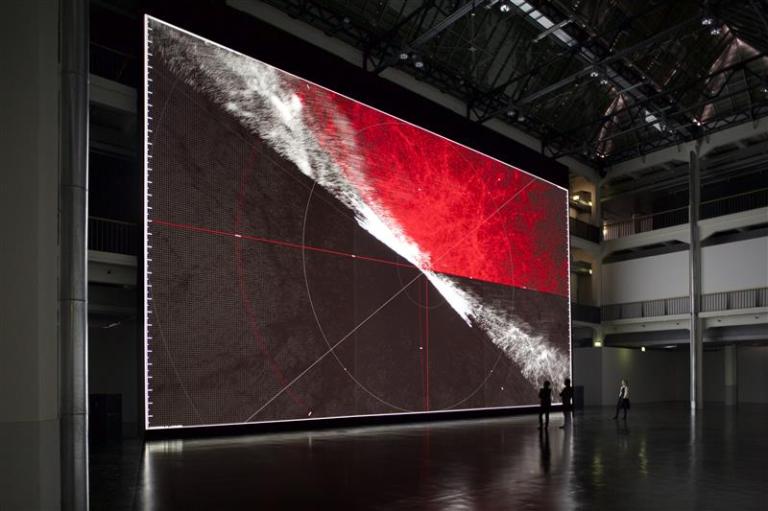 Are Team Lab Japan’s answer to Universal Everything? I do not think so they are a team of creatives equally matched to deliver moments of animated audacity. Only team lab seems much more concerned with reproducing nature as we experience it naturally and I think this is a running theme throughout their work – after all they are Japanese. Japans relationship with wave forms is well documented from the Hokusai’s ‘Giant Wave’ 神奈川沖浪裏 Kanagawa-oki nami ura and through Asia’s dominant traditional writing style. The calligraphic strokes of Black ink seem to effortlessly harness the force of liquid lines. What I find most interesting about Team Lab is and other creative entities like them is their commitment to shared processes of creativity. In their video works interactivity is blended with floor to ceiling projections to provide an immersive experience. Some of their installations follow the cultural practice of wrapping; the Japanese delight in the representation of things so a precious yet transient equality is maintained. With both the representation and its content bask in the shared ease at which they are transmitted to a perpetually increasing fan base. Here it is necessary to pay Team Lab a great compliment in their own language. Their art is a quintessential visual practice in which they provide memories as a Furoshiki風呂敷 (Thanking present) or as a continuation of Giri 義理 (Gift giving). So I compel you to enjoy these Japanese gift givers. The work below is from the groups exhibition in California, Continuous Life and Death – enjoy

An American artist widely acknowledged as an influential contributor to the new artistic domains of the 21st century. Roth can be easily seen as a front runner and already a great influence on artists seeking to use technology in there work. Roth is also a co-founder of the awesome Graffitti Research Lab, and the Free Art and Technology Lab both influential groups expanding into new spaces and potentialities of visual networked communication. The recent aesthetic of his work is very bloody I like the red of these works: Internet Landscapes (2016), a body of work that explores the artists experience of traveling Sweden searching for the physicality of the Internet. The press release from collect the WWWorld. Exhibition (2011) describes this newish realm of creativity,’to demonstrate how the Internet generation is implementing and developing a practice started in the Sixties by Conceptual Art, and further developed in subsequent decades in the forms of Appropriation Art and post-production: the practice of exploring, collecting, archiving, manipulating and reusing huge amounts of visual material produced by popular culture and advertising.’ really simplifies the climate of the last 8 years. Roth in many ways is a fine example of a creator who is well positioned to make good use of the new technologies such as quantum computing and developments in the internet as it grows and changes.

Rose Butler primarily works in moving image and video and is a very respected teacher and researcher (again in that beautiful place called Sheffield). A handful of her work makes use of interactivity where the observers of her work are considered as active components. The first example being Butler’s collaboration and commission  for FACT in the UK. This work was perhaps the first time this artist worked with the concept of surveillance; in this case pedestrians and members of the public were recorded going about their daily business and often shocked to see themselves on the big screen. An art installation that simultaneously explores the bigness of screens and how we are now watched and/or watching? Other works and exhibitions that include interaction are Stall, Barnsley (2005) featuring a reproduction of a market stall and then an interactive animation in which due to a loop in the recording participants can re-visit their initial visit to the market therefore offering a commentary and experience on the changing economic structure of markets. Again click on Rose’s Hashtagged name  to see more of her work.